Another line-up change for megadeth

Well, wish I could write my first blog post in a long time about a new Megadeth album; but the band is going through yet another line-up change and it is a big one. The first announcement came from Shawn Drover. It was a brief statement where he said he wanted to pursue his own musical interests. When I first saw his statement posted, my immediate thought was that this was definitely a good thing for the band. He is a nice person and perhaps a reliable drummer; but I’ve never found his drumming spectacular – something I can say about all other Megadeth drummers, especially Gar and Nick – and I think his playing lacked enthusiasm and often times sounded plain and boring. So I thought that his departure could pave the way for a new and better-fitting drummer and I was excited about it.

What I didn’t really see coming was Chris Broderick’s announcement which came soon after Shawn’s. A lot of the articles that mentioned both Chris and Shawn were published the next day; but Chris announced his departure just a few hours after Shawn did. The reason why it was more shocking than Shawn’s announcement wasn’t because we were hearing about a member’s departure – Megadeth has had so many line-up changes that it’s not really a surprise anymore – it was because two members quit right after one another, which many people took as something bad happening behind the scenes. 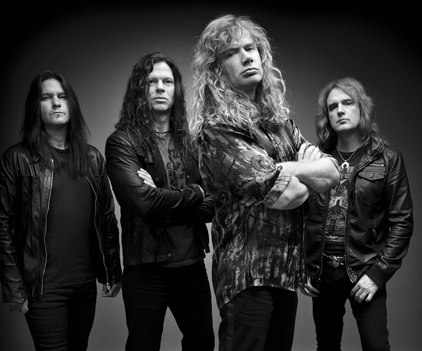 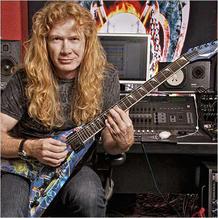 Mustaine in the Studio

Turns out it really was about musical differences. At least that’s the explanation we’re getting for the time being. You never know what else will be out there in time. Both Drover and Broderick gave interviews a few weeks after their original statements, saying that they wanted to explore their musical ideas that didn’t really fit Megadeth. Knowing that the decision maker in Megadeth has always been Dave Mustaine, you can also argue that Dave wasn’t really into the music Chris and Shawn brought to the table.

Anyone who is a fan of Megadeth knows that this band is a very well established one – i.e. it’s not a new band trying to find its identity or sound. They also know that Dave Mustaine – as the founder, main songwriter, guitarist and vocalist of the band – has the final say when it comes to the direction the band will take. For better or worse, this has always been the case and to expect otherwise is just not knowing the history of the band. Yes, line-up changes are hard and you never know if the new members will have a good chemistry with the rest of the band; but I’m actually excited about what’s next for Megadeth. I’m particularly thrilled about the possibility of hearing a new drummer in the band – Shawn just wasn’t a good fit and I know I’m not alone in thinking that.

Chris and Shawn have since announced they had formed a new band called Act of Defiance. There’s some fan speculation that they deliberately chose this name as a reference to their departure from Megadeth; and who knows, it might be true but I doubt it. Based on what we know so far, they left on good terms – both players especially have a good relationship with David Ellefson who remains in the band. To be honest, whatever the story is behind the band name, it sounds a little cheesy but then again not many band names are true originals. The duo also announced that they had hired former Scar the Martyr frontman Henry Derek Bonner as their lead singer and former Shadows Fall member Matt Bachand as the bass player. To be fair, I think these are all good moves on their part. If Chris and Shawn didn’t think that in Megadeth their music was getting the attention they thought it deserved, then choosing to pursue their own project is the right way to go. I don’t think anyone can blame them for it, really.

Act of Defiance has released a teaser for one of their songs called “Trowback” from their debut. Like I said, I get why they are pursuing their own project and I do think Chris is a talented guitarist, but this sample sounds a little generic and I didn’t find it all that interesting. It’s not different than any of the newer metal bands out there. To me, it’s another example that just because you can play the fastest, craziest solos doesn’t mean that you’ll be great at creating good, original music. Of course it’s just about a minute and a half sample from only one song of the album; so I will still listen to the entire record before I make a full judgment, but this doesn’t sound promising to me. They need to stop trying so hard to be the most metal band out there – they just need to let things flow and see what happens. I think they’d have a better chance of getting their names out there that way. Here’s the YouTube video of the teaser, see for yourself. 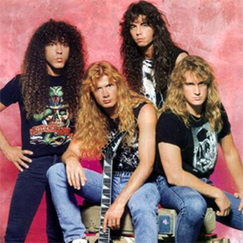 As for the Megadeth side of things, the remaining two members have pretty much been silent on the issue, except for teasers here and there that don’t really shed much insight. There are so many rumors going on right now that it’s hard to keep up. Of course, a lot of fans want to see a reunion of the “classic line-up”, the 1990-1998 line-up with Marty Friedman and Nick Menza, but it’s a difficult reunion to achieve. Nick Menza has stated that he’d be willing to do it (I’d love to see him back in the band!) but I don’t know if Nick and Dave have patched things up after the fallout in 2004 when Nick very briefly did re-join the band. Marty, on the other hand, poses an even trickier situation. He lives in Japan, speaks Japanese fluently and hosts various TV shows, plays with a lot of different musicians and basically has the artistic freedom to do exactly what he wants. He’s a huge celebrity in the country! Granted, he plays some metal here and there; but he’s not the kind of musician who likes to be labeled as a “metal guitarist” or a “shredder” or any kind of label that might stick. Getting him back in Megadeth is financially and artistically a difficult negotiation – and I’m not sure if he’s ready to leave what he’s got going on in Japan yet.
Another route is hiring two new guys; and, as expected, rumors are abundant on this front too. Jeff Loomis, Kiko Loureiro, Jeff Waters, Alex Skolnick, Mike Portnoy, Chris Adler and many others have been rumored as possible replacements. Of course the longer the Megadeth camp stays silent, the more names we’ll see pop up and since none of these rumors have any sources, no one should spend too much time on them without an official announcement from the band. Dave Mustaine has tweeted recently that he is starting rehearsals for the new album (he also tweeted last week that he was going to audition “one of his picks” for the guitarist position), so the implication is that the new members are pretty much determined. We’ll just have to wait a little longer for the press release.

Yeehaw! This week starts rehearsal for a new record. It will be great to fire up my Marshalls again!

I’m excited to be auditioning one of my final picks for my new guitarist today.

So all in all, Megadeth is in the studio right now, with two not yet announced musicians, recording their 15th studio album. I’m actually excited about the future of the band; I don’t think Drover and Broderick were necessarily the right people for the most creative sound so new members can give the band some new energy that will hopefully result in interesting riffs, memorable solos and original drumming. The way we like it from Megadeth!
Sources and Additional Reading:
http://www.blabbermouth.net/news/drummer-shawn-drover-quits-megadeth/
http://www.blabbermouth.net/news/guitarist-chris-broderick-quits-megadeth/
http://www.revolvermag.com/news/interview-chris-broderick-talks-leaving-megadeth-and-new-projects-with-jose-mangin.html
http://loudwire.com/shawn-drover-confirms-henry-derek-bonner-singer-new-band-chris-broderick/
http://www.blabbermouth.net/news/rumor-megadeth-taps-lamb-of-god-drummer-angra-guitarist-for-new-album/