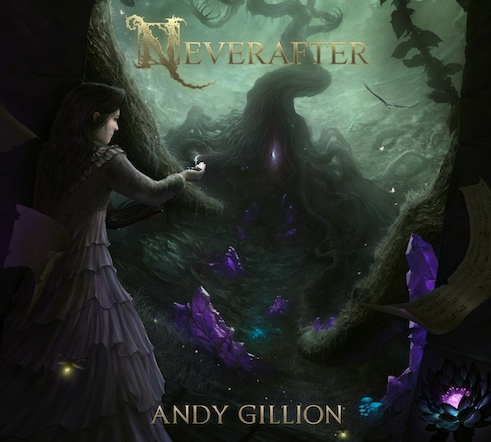 It’s hard to pull off concept albums, isn’t it? Some become legendary, others are regarded as “overdone”. How do you find a story that captures the listener’s attention throughout an entire musical album? Now imagine doing this with almost no lyrics! Andy Gillion, a guitarist mainly known from the band Mors Principium Est, has just released his solo debut and took on this exact challenge. His album, Neverafter, is indeed a concept album; but it’s also predominantly instrumental. So, how did this work? Let’s find out.

I didn’t know Andy’s music before. I’m going to be honest, in order to do this review fairly, I intentionally didn’t listen to Mors Principium Est. This is his solo effort, so I thought it deserved its own space in my head without any subconscious comparisons.

Neverafter, which will be available on November 15th, has 11 songs. They were all written by Andy himself – including a small lyrical part – except for the guest solos. Speaking of guest solos, Jeff Loomis and Paul Wardingham laid down solos on two different tracks. And one track features a guest vocalist, Christina Marie, whose voice is just phenomenal. The drums were mapped out by Andy originally, but during recording, 66Samus (Samus Paulicelli) took over and executed the drum parts for the album. 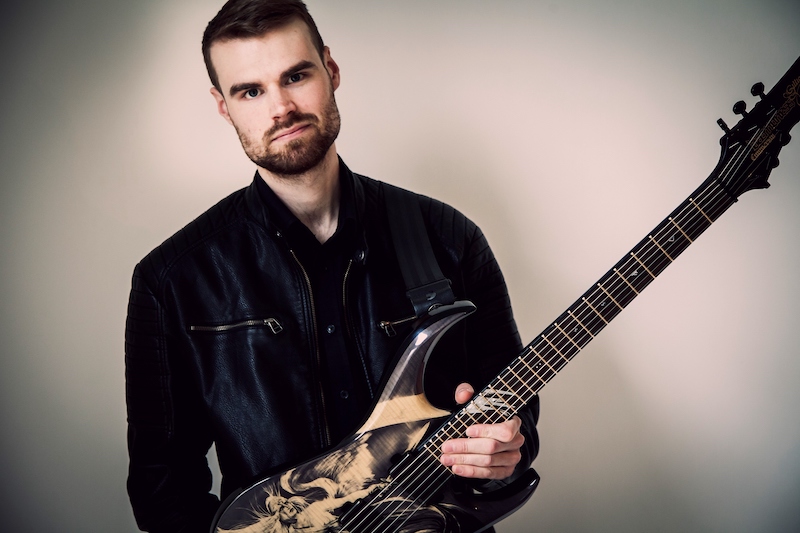 The album sounds great from a production standpoint. I thought it was well balanced. Since the album features elements of modern metal, the production reflects exactly that; especially with regards to the guitar and drum tones. The record was co-produced, mixed, and mastered by Thomas “Plec” Johansson, who previously worked with bands like Soilwork and Scar Symmetry.

Even though Andy Gillion is known as a guitarist, I wouldn’t call this a “guitar album”. When I think of guitar albums, I think of lots of shredding; essentially albums where the guitar takes the front stage all the way through and everything else is just assisting the guitar. Yes, this is a guitar-driven album in some ways, but there’s enough room for everything else too. Since it’s a concept album, and the music has to serve the story, Andy utilized whatever instrument, or whatever melody, was needed for the flow. It kind of reminded me of Gretchen Menn’s Abandon All Hope in that sense. They sound nothing alike, but the thinking is similar. Even when you hear lots of guitar, it’s not always about shredding (though, the shred parts are definitely there), it’s more about the melody. I’m a big fan of melody – that’s what evokes emotions in the listener. Ultimately, isn’t that the goal of music; to evoke something in you?

Our story here is about a girl named Aria. She’s just a young girl who, tragically, lost her mother. The only item that Aria has of her mother’s is a musical box; except the box no longer makes a sound. In hopes of finding the melodies that once delighted her ears, she enters into a deep sleep. We travel through her dreamworld, as she seeks the melody of precious memories.

Andy told me via e-mail that he usually writes better with a vision in mind. This is why he wanted to go for a concept album. He wanted the story to lead the music instead of “piecing together riffs.” He also added “the idea of a dreamworld meant there were no limits or boundaries to where I could take the music.” 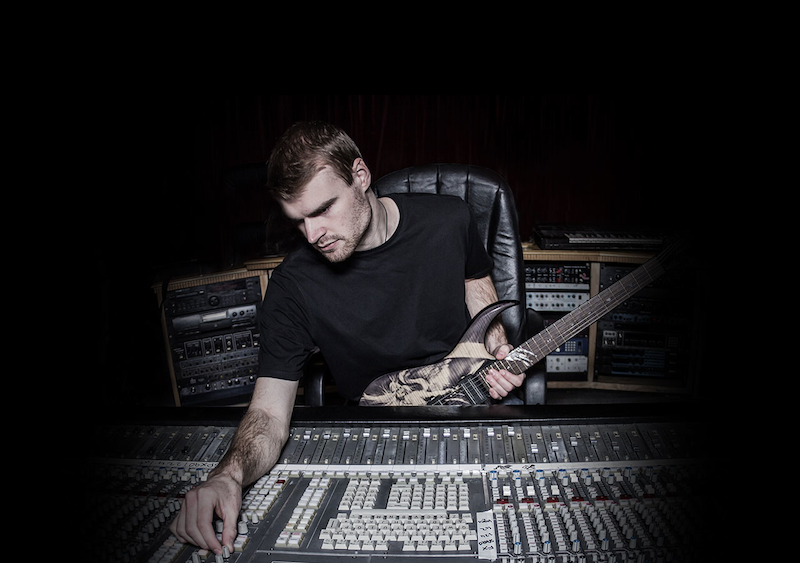 The album overall has elements of progressive metal, melodic heavy metal, and even mellower vibes of acoustic guitars and orchestrations. Like I said, whatever helped the story… I quite appreciated that. It kept things interesting. Actually, some of my favorite parts of the album were the slower, more melodic parts. In general, I will say this: instrumental albums are hard to execute because it’s harder to keep the listener engaged all the way through. I know this isn’t technically an instrumental record, but it’s almost there. Andy’s answer was to not follow a musical formula and let the story dictate the music. It’s easy to listen to all the way through because of that. The mood keeps changing based on where Aria is, so you, as the listener, get to listen to different vibes overall. It’s so much better this way, in my view.

The album opens with Nocturne, a track that sets the stage. It has an ethereal beginning with beautiful orchestration. Once the guitars kick in, it wouldn’t be an exaggeration to say Andy shreds us into the album! The next three tracks, Becoming the Nightmare, Skyless, and Becoming the Dream all show the more progressive side of the music. I’ve been learning music theory lately (I know I’m late to the game!) so I’m obsessed with note choices and how they can alter the mood if executed well. You feel the “nightmare” versus the “dream” as you go through. Becoming the Nightmare, in particular, has so many twists and turns, not just in terms of scales, but also in terms of the guitar tones and the overall vibe. The beginning has a nightmarish sound for sure but around the 2:30 mark, we go into a mellower pace. The guitars are cleaner this time, and the melody is not so nightmarish anymore. It reminds me of Jason Becker’s haunting compositions of recent. Skyless, which features a guest solo from none other than Jeff Loomis, goes through piano arrangements, progressive metal parts, blast beats, and all kinds of melodic vibes. This is also the one track that’s already available and you can check out the video on YouTube.

Then, there’s Hiraeth… If you’re wondering what the word means, keep reading… I did get to that! This song, featuring Paul Wardingham, is so good that I would have chosen this to promote the album if I could only pick one. It’s melodic, with a fantastic guitar sound that carries you most of the way. There are definitely some great leads here, but what makes this song the best in the album is the rhythm, the orchestration, and of course, the melody. It reminds me of how King Diamond sometimes would add these haunting songs to demonstrate a harrowing time. It’s an emotional song with lots of different elements. Just a great track…

Similarly, Lullaby is another mellower, melodic track. I don’t know why, but I kept going back to these mellower tracks. There’s so much depth in them. And there’s some great playing here – Andy’s phrasing is great in these melodic moments. There’s very clever slides, bends, and nuances in the guitars. There’s a cool choir that kicks in towards the end.

The album closes with the title track, Neverafter. At 8 minutes and 30 seconds, it’s the longest track here. At times, it made me think of Paul O’Neill’s influence on Savatage, at other times I thought it would make a great movie soundtrack. It’s definitely atmospheric. Great use of the keyboards in general. An epic track to end the album. At the end of the song, you can hear Aria waking up from her sleep. Did she find the melody she was looking for? Well, that’s up to your interpretation. Judging by all the melody on the record, especially on some of the later tracks, I’d say she did. But you get to make your own mind.

Last but not least, something else that I thought was quite clever. If you actually look at the song titles, you get a sense of the story without even reading a synopsis. I love it when musicians drop hints like that. Here at Mega-Depth, I’m all about those details! “Becoming the Nightmare” turns into “Becoming the Dream” – and you’ll hear the nightmarish vibe turn into something dreamier throughout the music. I think the dream is her own dreamworld; the nightmare is the loss of her mother. “Black Lotus”, according to my web search, has something to do with rebellion against the ordinary. Perhaps it’s Aria’s anger that her mother was taken away from her. Then the pursuit of the “lost melody” leads to the discovery of “shards of a forgotten world”; the world where the melody might be hidden. And that world evokes “Hiraeth” for our Aria. It’s a word that apparently doesn’t have a direct translation from Welsh, but it’s the concept of “longing for home”. Everything sort of flows together with the titles. We end with “Neverafter”. I had to think about that one… She wakes up, and I do think she’s found the melody, but the word is clearly a play on the phrase “ever after”. So, something will no longer occur from then on, hence “never after” … I interpret that as her realizing life will never be the same without her mother even if she can find melodies in her dreams. At least that’s how I’ve read it.

For fans of instrumental metal with lots of melody and orchestrations, this is a great listen. You get to hear some vocals as a bonus too! I think an album like this is best enjoyed when listened to its entirety. The songs definitely stand on their own; but it’s a far richer experience to follow the story because then you realize why the song went in the direction that it did.