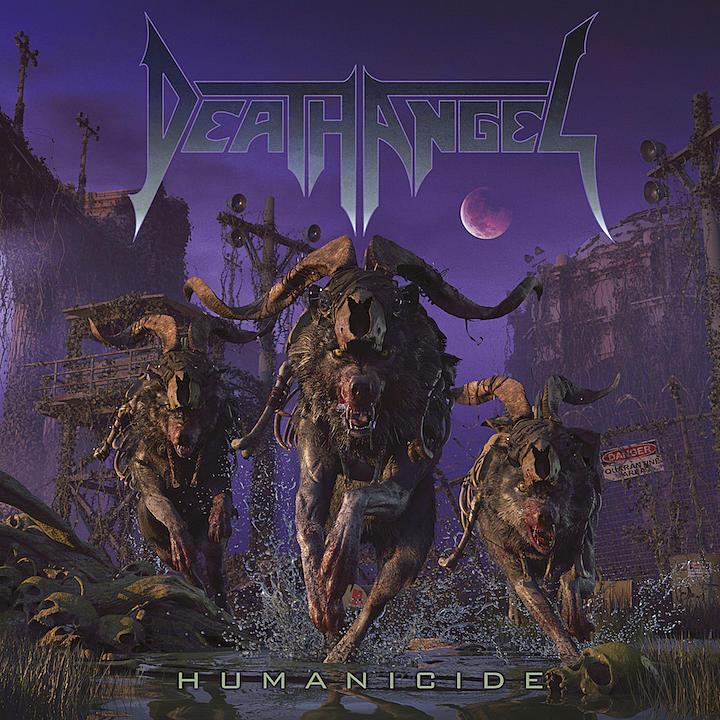 I’ve been meaning to write about Death Angel for a long time. To say they are underrated is an understatement. It’s hard to come across their name when people cite their thrash metal influences, but as far as I’m concerned, they’ve put out some high–quality material over the years! When I found out they had just released a new album called Humanicide, I knew this was my chance to finally write a few words about these metal veterans.

My introduction to Death Angel was 2004’s The Art of Dying. I’d heard of the band on various metal magazines but hadn’t yet checked them out. And then this album came out. I didn’t know anything about the band’s history and that this was their comeback album. I approached the album without any expectations; just a young metal fan wanting to learn more about another thrash band. As soon as I heard the opening track, Thrown to the Wolves, I knew I was in for a treat! TAOD is still my favorite album from these guys. Maybe it’s because it was my introduction to them, but seriously, if you’re a fan of thrash does not sacrifice melody, this is one of the best examples of that. 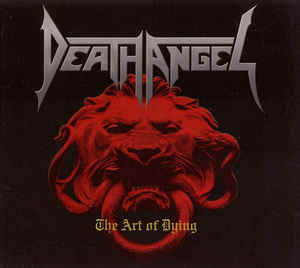 Death Angel has a long history. If it doesn’t seem that way to you, it’s perhaps because they suspended band activity in the ‘90s after an accident left then-drummer Andy Galeon seriously injured. The band had to cancel tours as they refused to tour with another drummer. But when you read interviews with band members, it’s very clear that they were already incredibly frustrated with the industry. They had been working their asses off, producing albums just as good as their contemporaries, but were gaining little to no traction. Galeon’s injury was salt in the wound. The band took it as a sign and stopped Death Angel, while they individually sought other musical projects. It turned out, this was a temporary hiatus. After joining forces together (without original guitarist, Gus Pepa) for Thrash of the Titans to support Testament’s Chuck Billy, they realized the magic was still there. As was the fan interest. All right then, time for a new album!

It’s been a long time since then. This year’s Humanicide is the band’s 9th studio album; 6th after their re-union in 2001. Even though there’s been some member changes here and there, there are no signs of slowing down for Death Angel.

The secret of their music is in the versatility of their songwriting. Ever since their inception in the ‘80s, they never really wrote songs in one particular way. I don’t get bored listening to their music because, while they are within the parameters of what would be referred to as metal, they are never afraid to add different flavors here and there. Just listen to Discontinued from Act III and tell me if you’ve heard that kind of metal from anybody else! It’s amazing to me that they haven’t lost that spirit to this day. They are progressive in the way they write metal, but the groove and the melody are there too. And Mark Osegueda’s vocals are refreshing to hear in a genre crowded with brutal vocals or way too much screaming. Sometimes those can work too but I’m a much bigger fan of clean, melodic vocals.

As I mentioned before, I’m a huge fan of The Art of Dying. I liked Killing Season (2008) and Relentless Retribution (2010) too but they never captured my attention the way TAOD did. A part of it was because I didn’t find the production as good as that of the 2004 comeback. The Dream Calls for Blood (2013) was a step in the right direction, but it was The Evil Divide (2016) that reminded me why I loved this band in the first place. The Evil Divide is my second favorite from them and from the opening moment, you know this is going to be a crazy ride. Everything I loved about Death Angel was right here on this album and every instrument sounded good in a well-balanced mix. 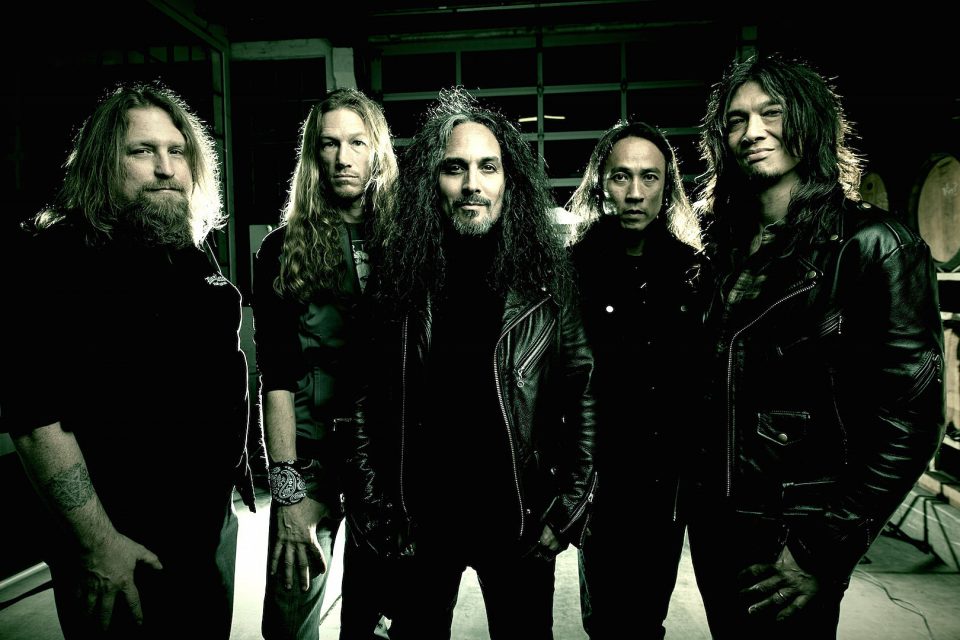 So, how does Humanicide compare to all these?

First of all, it sounds great. The band once again teamed up with Jason Suecof for production duties and Rob Cavestany co-produced. In an interview with Billboard, Cavestany mentioned he did all pre-production himself and now that he’s been getting more experienced in production. You can tell he’s getting better too because the album sounds good! The Evil Divide sounded good too – which, I guess, isn’t surprising because the same production team was at the helm. It’s hard to fully grasp what the chemistry is among band members in a studio album, but after changing their long-time bass and drummer around 2009, there doesn’t seem to be any issues with the way the music is executed. That, in and of itself, is a testament to how great Damien Sisson (bass) and Will Carroll (drums) are. Cavestany also said because everyone has slightly different tastes in music, even when he’s done writing a track, an input from band members can unleash something a little different but even more interesting.

“I like a lot of different kinds of music, so I bring some different shit to Will [Carroll, drummer] that he wouldn’t usually play. But in the end we find this middle ground of a sound that neither of us was expecting to happen.”

In my opinion, songwriting overall is full of high–quality material, but I thought The Evil Divide was a stronger album. Humanicide delivers plenty of punches too, but there were certain moments that diluted the strong effect of others. Still, there’s plenty to appreciate.

The title track opens the album with this great, melodic harmony that is reminiscent of Iron Maiden. The production, right off the bat, sounds crisp, bright, and well-balanced. But then we get to our beloved thrash! There’s great riffs throughout this track and some fantastic drumming. Will Carroll is definitely an amazing replacement for Andy Galeon.

I thought Divine Defector and Immortal Behated were possibly the two weaker tracks on the record. There are good moments in both, but these weren’t my cup of tea; even after a few listens. I think Behated, in particular, could have found a way to become more intriguing but certain parts dragged on too long and I didn’t think the piano parts worked. The ideas were great throughout, but the execution just didn’t do it for me.

Luckily, the rest of the album is pretty amazing. There’s Aggressor, with an intro that reminded me of those mystical intros Annihilator likes to do. The main riff kicks ass, and the chorus is so catchy with some strong gang vocals as back up. The chemistry between Rob Cavestany and Ted Aguilar is undeniable. I Came for Blood definitely is the punk track on the album. Death Angel always likes to mix it up with variety. No exceptions here. The solos were my favorite on this one. Rob knows how to add interesting flavors to his songs. He could have gotten away with much simpler solos on a punk infused track like this, but he chose not to and made it far more interesting.

Alive and Screaming is the first song that guitarist Ted Aguilar wrote for Death Angel. I think he passed that test with flying colors! It’s one of the strongest tracks on the album. This is very much in the vein of ‘80s thrash metal, so much so that it would have easily fit on one of the band’s earlier albums. Of course, you can’t have ‘80s thrash without some impressive speed – so be prepared! The Pack shows the band knows how to keep a groove! The guitarwork gets more intricate in the chorus. The rhythm behind the second solo reminded me of Megadeth. Ghost of Me is a straightforward thrash song, with guest solos from Alexi Laiho. There’s a cool breakdown where the bass takes the forefront.

Even when we get closer to the end of the album, Death Angel still wants your attention! Revelation Song is one of the best songs on the record. It’s a mid-tempo track, and to be honest, the verses didn’t grab my attention at first. But the chorus is so good that it makes the song! It’s also Mark’s best vocal performance on the album, in my view. The lyrics seem to talk about what we do to each other as humankind; at least I got that vibe. There’s a fantastic, groovy, bluesy breakdown at the 2:35 mark. This is why you listen to Death Angel. Their influences come from a wide array of musicians and they are never afraid to add those flavors where they see fit.

Of Rats and Man has another cool intro. The build-up is rather anti-climactic but the song still works. There are catchy, technical riffs and the chorus is solid. The leads, once again, are stellar and I loved the singing on this one too. I read the lyrics as disappointment in humankind once again. I think they stuck to similar themes throughout the album, as the title Humanicide would give away. This one talks about how we once had pride in our work, but then we got greedy and now the “sky goes black”. The last song, The Day I Walked Away, is a bonus track but available on most versions of the album. It’s a decent track. I think the previous song is a better album closer, and in a way it is the original album closer, but the bonus track doesn’t disappoint either.

Death Angel is one of the best metal bands as far as I’m concerned. It’s encouraging to see many sites now featuring articles about them. It’s also great to see the band active and stronger than ever. Rob and Mark still got it, and the musicians that have now become a part of the Death Angel family are certainly up for any task the duo may throw at them.

And now it seems a long-gone myth

We’re full of selfishness, and greed

The truth of rats and men”