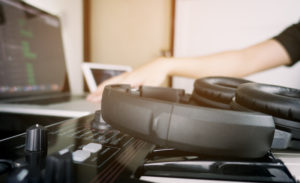 Stock photo; not my workstation.

One of my goals on this site is to share my journey in writing my own music. I am not an expert in home recording or guitar playing, but I think it’s important for people who are at different levels of their journey to share what they’ve learned. I’ve picked up a lot from others’ accounts, and I’m hoping that what I post in this Gear Talk section can be helpful to you.

I’ve recently finished my 3rd song called Ode to Malcolm. The first two I did were called Mossball Aliens and Wrong Emphasis on the Wrong Syllable. You can check them all out on SoundCloud.

Now, none of these songs is exactly a masterpiece. So, while listening to them, take them more as my journey in recording. If I could go back in time, I’d do so many things differently; and since my skills have improved, I can play some of the solos better. But I’m intentionally not editing these right now. I’d like them to serve as reminders of where I was when I recorded them. But if you go from older to newer songs, you’ll hear some changes; especially in terms of overall sound.

Ode to Malcolm was the second song I did on Logic Pro X. When I started recording for the first time, just a couple of years ago, I was so new that I wasn’t going to purchase a separate DAW. I already had an iMac, so the easiest thing to do was to start with GarageBand. That was a smart thing to do because I was able to learn some basics like adding a software instrument, operating different MIDI plug-ins, etc. without buying something new. After a while, I switched to Logic because I wanted to take advantage of the extra features: bigger library of loops, more advanced editing capabilities, and improved mixing options. After learning GarageBand, I wasn’t going to upgrade to anything other than Logic because I didn’t want to waste all that knowledge. Since GarageBand and Logic share a lot of features, to the point that even the interface almost looks identical, I didn’t have an issue making the change. Of course, there were new things I still had to learn – and you can never finish learning Logic because there’s just so much you can do – but overall the transition was easy.

In terms of drums, I previously used one of the default drum kits that came with either GarageBand or Logic. I was trying to take things one at a time and not overwhelm myself with trying to learn too many things at once. Besides, there’s also a budgetary concern that comes with music; you want to buy everything that will give you a better sound, but you also need to pay your bills… Ah, the realities of adult life! Anyway, I knew I needed a better drum sound so I actually ended up buying two of the most revered products in the market: DrumForge and Superior Drummer. I’ve gotten a chance to play around with both, and my conclusion is that they both offer high-quality drum sounds; but for Ode to Malcolm, I went with DrumForge. The reason was that with Superior Drummer, I felt like I had to make some tweaks to get to the right sound that I had on my mind. It sounds great, don’t get me wrong, but this was all about getting to the sound I had in my head without spending too much time. DrumForge was a little bit easier to work with because the sound I got right off the bat was great! I didn’t really have to tweak it all too much. I think if I went with a heavier sound in this song, I probably would have picked Superior because I love the metal pack they have, but for this song, DrumForge did the trick. I’m thrilled with how the drums came out!

I talked about music theory before on this site and I’ve received a lot of great feedback from you guys. I struggled with music theory for years, but I found out a couple of years ago that it was because I was trying to learn it the wrong way. This new song, Ode to Malcolm, wasn’t actually supposed to be a song. I was studying a new scale and I wrote a new lick to practice; but in the end, I liked the melody so much that I decided to work on harmony and turn it into a short song. The AC/DC vibe was pretty obvious, and Malcolm Young is one of my favorite guitar players, so I decided to dedicate this to him.

Getting better at music theory requires a lot of practice and patience. If there’s one thing I’ve learned recently, this is it! My methodology in understanding theory is I don’t just blindly read instructions, nor do I try to memorize what notes are in there. Instead, I take a scale and, after studying why the scale is made up the way that it is, I write something. It doesn’t have to be a super complex solo; all I’m trying to do when I study theory is to make sure I don’t just memorize, but I train my ears to get a feel for the scale. I still have lots of training to do, as I will explain later. Nevertheless, this is my goal. Besides, if you’re learning where you can find the notes of whatever scale you’re practicing on the fretboard, you’ll have a lot more fun doing that while playing your own melody instead of just going up and down the scale.

The seeds of this song were sewn when I started practicing the G Major scale: G-A-B-C-D-E-F#-G. Simple enough, right? So, I grabbed my guitar, started jamming some ideas and wrote some stuff I liked on Guitar Pro so I wouldn’t forget. I also use Guitar Pro’s virtual guitar fretboard so I can visualize where the notes of the scale are. This normally works just fine; but I later found out that I was missing one key component of music: ear training. I wrote some licks thinking that I was on the G Major scale. But just because you use the notes in a certain scale doesn’t necessarily mean that you’re on it! Especially when you consider the fact that the relative minor of a major scale will utilize the same notes, but it will sound completely different! Like I said, I’m still learning so even though I’d heard of the relative minor concept before, I didn’t grasp it fully until my guitar teacher pointed out that what I wrote wasn’t really in G Major.

This was the biggest learning moment while I wrote and recorded Ode to Malcolm: understanding what key you are in. It isn’t as easy as I thought, but it’s a necessary skill to have if you want to harmonize and build upon your musical ideas. I asked my teacher how he could identify that I wasn’t in G Major. It didn’t even take him long, all he did was listen to what I was playing. He said these matters are closely related to ear training. Basically, certain scales will overall have a different feel to them and an advanced player like him will have the ear training to hear those nuances. But the bigger giveaway is where you end up landing after you’ve played your solo. It’s a little hard to put into words, but I think that’s the best way to determine where you are, assuming that you’ve already paid attention to your note choices as you were writing. Here is a test you can apply for better ear training: after you wrote your lick or solo, try to finish it in all the different notes of the scale you’ve used so far. There will be one note that will fit so much better than all the rest. It will almost be like the solo was calling for that one note to come into the picture and conclude the whole thing. For example, in the second solo of Ode to Malcolm, after I play for a while and the song actually comes to an end, the solo rests on E. All the notes I played in there can be found in E Minor, G Major, or any other scale that uses the same set of notes; but if I’d used anything other than E in there, it wouldn’t have sounded the same. That’s why I’m not in G on that lead. The funny thing is, I intended all leads in this song to be in G Major, but this is how you learn! And in the end, I had some nice melodies that I could turn into a nice rock song, so nothing’s lost. One day I’ll get to G Major too, and this time I’ll actually write something that is indeed in G Major! 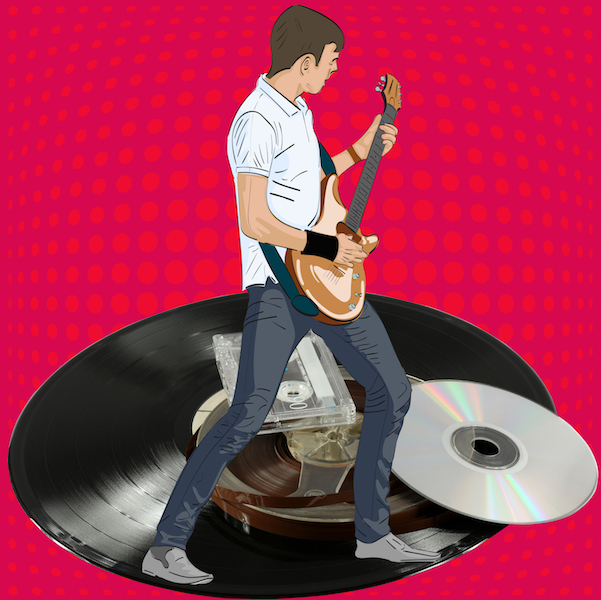 I still need a lot of improvement in theory; so, as you’re reading this, if you spot any errors in my understanding of theory, feel free to add your comment! Like I said, the whole point of this Gear Talk section on my site is for all of us to learn from one another! That’s why I’m sharing my journey and what I’ve learned.

The last thing I will say about Ode to Malcolm is that this was also the first song where I paid more attention to EQ. This was a whole new world to me, and to be honest with you, I’m still trying to wrap my head around some of the concepts. I definitely understand what EQ’ing is used for, and I definitely understand the value of it. But understanding what it’s used for and being able to execute it are two different things. My awesome guitar teacher, Cameron Ryan, did the final mix for this song and he helped me make it sound so much better. I never realized how big of a difference EQ makes – it’s something I need to learn more about! One example I can give you to illustrate what EQ accomplishes is; I was having some issues with the way the toms sounded. They had this weird reverb-y sound and I kept going into DrumForge to try to fix it, but it didn’t seem to have any issues when I listened to the drums on their own. Cameron pointed out it might have something to do with EQs of guitars and bass. I just couldn’t believe it. It had to be something different; how could the guitars affect how the toms sound the way they do? But lo and behold, he was right! When you listen to the song, you’ll notice the toms sound super clean. We didn’t tweak anything on DrumForge to get that sound, it was all about adjusting the volume of certain frequencies in guitars and bass. It still blows my mind how big of a difference the right EQ settings can make.

I will share a lot more in Gear Talk soon. I am also working on a new song that sounds very different than everything else I’ve already done. Let’s see how I will apply theory and EQ concepts to this new one!