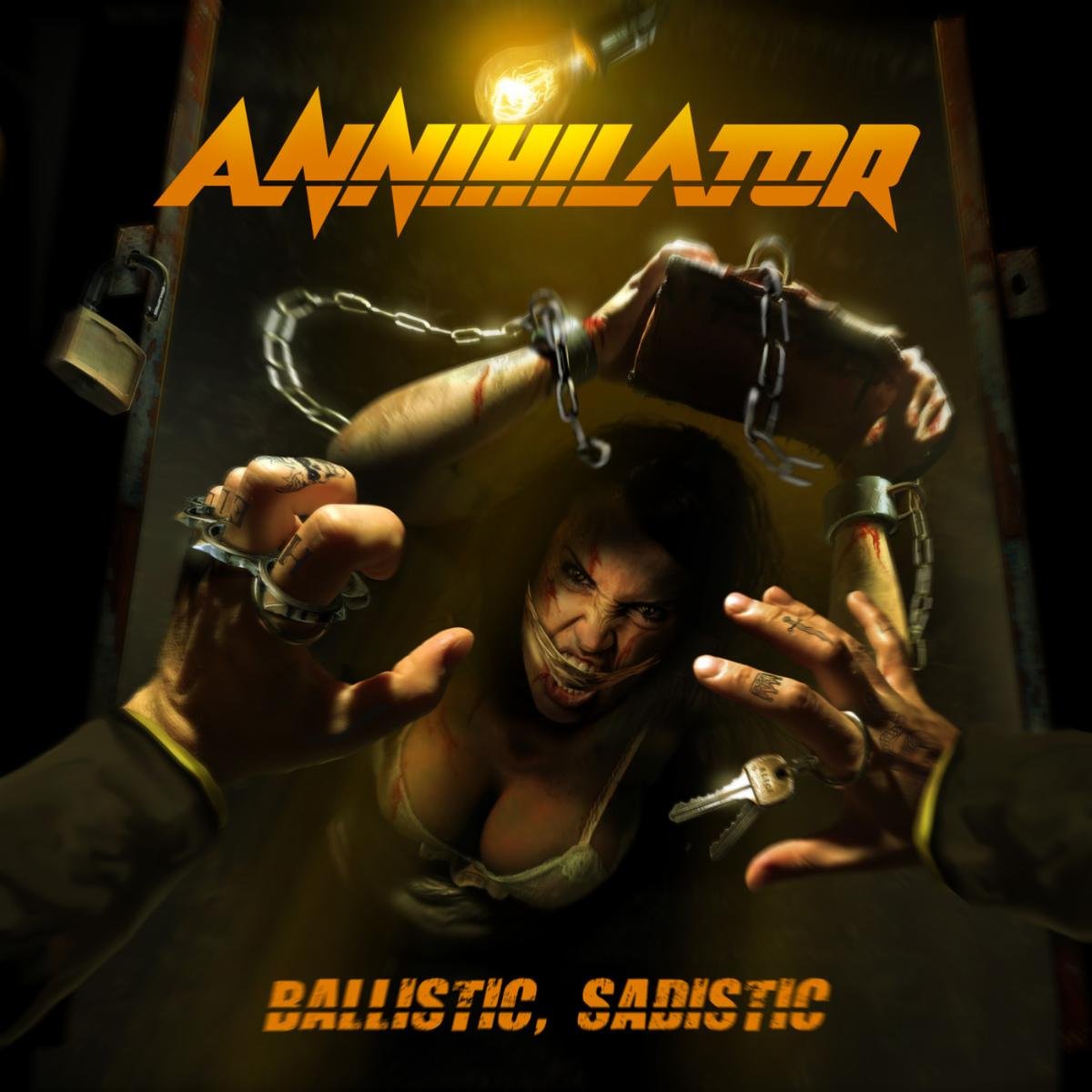 It’s always a good start to the year when one of your favorite bands releases a brand-new studio album. Some news coming out of the rock and metal world were really sad, but getting some new music reminds me of the immortality of good tunes. It’s something to appreciate no matter what happens. And who better to remind me of that than Jeff Waters and Annihilator? This band is one of most resilient ones out there. Its leader, main composer, guitarist and vocalist, Jeff Waters, has been through a lot. But he’s still here. His band is still here. And they’re still making solid heavy metal tracks. Their 17th studio album, Ballistic, Sadistic, has taken its place as another gem in this underrated band’s catalog.

I wrote about Annihilator before when I reviewed their previous release, For the Demented. I’ve been a fan of this band for 20 years now. Ever since I heard Alice in Hell I knew this music was not being made by any other band. You could hear the aggression of early Metallica records, but with far more melody injected into the songs. Waters wasn’t playing the guitar like anyone else. It’s true to this day. You won’t find Annihilator’s sound elsewhere.

Over the years, they released some underrated gems like Carnival Diablos (2001), Schizo Deluxe (2005) and For the Demented (2017) along with the first two albums that almost everyone considers classics (Alice in Hell & Never, Neverland). While I can’t say I found every album as good as these ones, I’ve always thought that Jeff Waters had a unique style of guitar playing; a style that defines the sound of the band. For decades now, Jeff did his own thing. And for the most part, it’s worked! The band is still here and active! I admire him for that. He could easily keep touring the world playing tracks from the first two albums, but he refuses to be a nostalgia act. Ballistic, Sadistic is Jeff’s way of saying “I’m not done!”

Going into this album, there was a major change in Jeff’s life. He’s from Canada and lived there up until a few years ago. Not only that, but he’d actually built a home studio and was recording some of the later Annihilator tracks there. But life can have other plans. He’s now married to Angie Waters, (Megadeth’s David Ellefson officiated), and he moved to Durham, UK with her to start a new chapter in his life. He was very candid in interviews about everything he and his new family went through during this transition. He’s now all settled in Durham with a brand-new studio he designed and built from scratch! It is in this studio, called Watersound Studios, that Ballistic, Sadistic was produced and recorded.

For the last few years, Waters has enlisted the help of the same group of musicians for live shows, as well as some studio work: Rich Hinks on bass, Aaron Homma on guitars, and Fabio Alessandrini on drums. For the Demented saw a close collaboration between Waters and Hinks for the music. This time, drummer Fabio Alessandrini shared co-writing credits with Waters for the music. Maybe Waters is trying to have a different member involved with each new album, who knows? Either way, I think it’s a step in the right direction to have someone else chime in with the music. Although, from the sound of the album, it is quite evident that Jeff still contributed the bulk of the music. He also played all guitars and bass and did all the vocals. Drums were recorded by Fabio Alessandrini. The band never hid the fact that they used Superior Drummer for some of the previous releases, but this time around, we get to hear a real drum set played by a band member.

I thought the album was mixed well, I listened multiple times with Sennheiser Momentum and Bose Noise Cancelling headphones. Waters likes to do utilize interesting chord voicings, he goes beyond what you would normally hear from thrash bands, so it was great that the mixing allowed every detail to be audible. 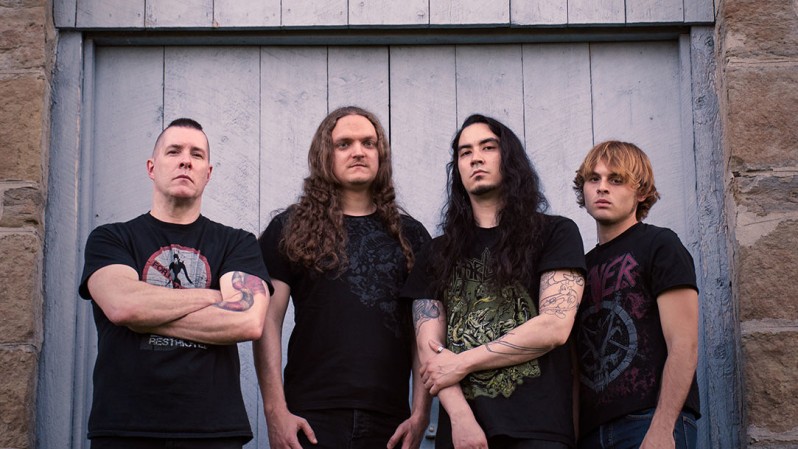 In terms of the songwriting, I’d say this follows along the lines of For the Demented. There are some great tracks here – and I will highlight my favorites – and the album establishes another creative chapter in Annihilator’s rich history. There are a couple of tracks, however, that sounded a little too much like some of the band’s older songs, and to me, that diluted the effect of an otherwise incredibly creative album. Using riffs or melodies from older songs is not unique to Annihilator, but when you have an incredibly talented and innovative guitarist as Jeff Waters, I guess expectations are higher.

The album kicks off with Armed to the Teeth, with groovy riffs and a really cool chorus. I’ve always liked Jeff’s singing but on a track like this, you do miss Dave Padden. He’d have brought this to another level. Oh well… Then comes The Attitude, an angrier track for sure. You can tell by the more aggressive music as well as the lyrics. After reading some new interviews Waters has done, the lyrics have made more sense to me. Around the 2:40 mark, there’s an awesome riff – classic Annihilator! This one will satisfy fans of speedier and angrier songs!

I genuinely enjoyed Psycho Ward. If memory serves, this was the first song they released to the public. It gets better with each listen. I really love the main vocal melody. It’s so catchy and well executed. Annihilator doesn’t feel the need to keep the vocal melodies “dark”, like some metal bands do. They can do these happier sounding vocal melodies even when the lyrics aren’t necessarily “happy”. It creates a contrast between lyrical content and musical tone. I also loved the rhythm guitars behind the main solo. You hear remnants of old Annihilator songs, but for the most part, this is a really fun track and one of the strongest on the album.

I Am Warfare is the polar opposite of Psycho Ward. It’s much darker in every way. It’s very aggressive and fast with Jeff doing some of his best singing. The pre-chorus and the chorus especially are beautifully done. They’re dark but very melodic. When I hear modern Annihilator, this is the type of song I like best. It’s new, but familiar in a way. Oh, and there’s a great breakdown around the 1:55 mark – get ready for some headbanging! But I just can’t get over how great the pre-chorus and the chorus sections in this song are… We follow this one with Out with the Garbage, another thrashy track. It’s another aggressive song with lyrics that match the musical tone. Again, if you refer to some interviews Jeff has one recently, you’ll see why he made these songs. This track also has the only solo from the band’s other guitar player Aaron Homma. Every other solo was played by Jeff Waters.

The next on the album is Dressed up for Evil. This is where I was a tad bit disappointed because it sounds so much like Word Salad that for a second it confuses you. A few years ago, Waters, in his usual blunt style, admitted that some Annihilator tracks showed his Metallica and Megadeth influences a bit too much. I believe he was referring to the album Suicide Society with those comments. Now I think we may be at a place where another influence is showing up a bit too much: his own. The other track that made me feel this way was the 9th track, Lip Service, which was done in the same style as Knight Jumps Queen. It’s too bad because in both cases, the songs have some cool NWOBHM style leads, but I couldn’t get into them because of how similar they were to earlier tracks. This album would have been so much stronger without these two tracks.

Luckily, we also have songs like Riot which is a hell of a tune! It might be my favorite, though there are a couple more candidates for that slot. Jeff delivers another impressive chorus. The guitar riffs are ferocious, and the song has plenty of groove and melody all at once. One of the best songs the band has ever done.  One Wrong Move has a cool, eerie breakdown around the 2:0 mark. The chorus reminded me of No Way Out. It’s a good song, just didn’t find it as memorable as some of the others.

We end the album with The End of the Lie. It’s a clever title, I almost typed it wrong for the article. The riff is reminiscent of King of the Kill, the song is much faster than that, though. It’s full on thrash! And the riffs evolve and change quickly. I think Fabio did a great job with the drums too; it’s true for every track but you appreciate it more as the album closes with this challenging track.

Overall, I think this is another solid effort. I prefer For the Demented over this, but clearly, Annihilator has plenty of fuel left in the tank and continue to work hard to release new tracks and keep touring. I admire Waters’ decision to have another member involved. Perhaps it’s Aaron’s turn next? Jeff Waters is one of my favorite guitarists. It’s not even funny how underrated he is and how unique his style is. Ballistic, Sadistic has a good diversity in song structure, riffs, melodies, and vocals. Sure, some songs show traces of earlier tracks a little too much; but there’s so much new and original material that they make up for it. If you enjoyed For the Demented, this will also be right up your alley. Don’t miss it.