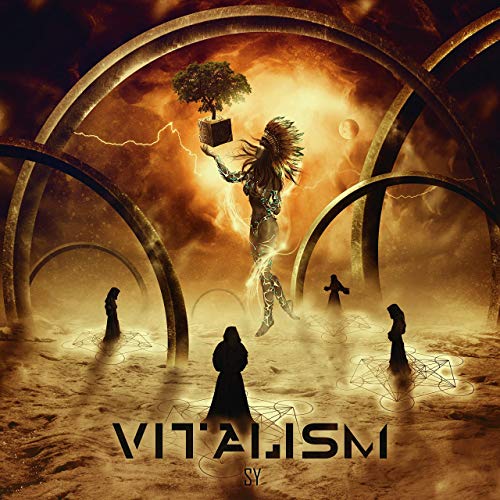 I originally intended to write about something else but when I heard the band Vitalism’s music, I knew I needed to tell more people about them. So, I started familiarizing myself with their latest EP, SY. It has 5 songs – and I am not exaggerating when I say it’s some of the best modern instrumental metal that I have ever heard.

My introduction to Vitalism was a complete coincidence. One of their guitar players, Lucas Moscardini, liked one of Mega-Depth’s Instagram posts. When I see a guitarist on social media whom I didn’t know before, I try my best to look into their music. I don’t always have the time to do this, but when I do, it’s a great way to get to know younger players. Going through Moscardini’s profile, I found out about his band, Vitalism. The first song I checked out was called Favela. It was a small clip on Instagram, but it sounded so good that I checked out the full track on YouTube, and later added the EP to my Spotify playlist. I will talk more about Favela and the EP that it’s on, but suffice it to say this was the track that made want to discover more.

According to their website, Vitalism originally started as guitarist Ed Garcia’s solo project in 2014. Over time, the line-up took its shape. Today, they are comprised of Ed Garcia and Lucas Moscardini on guitars, André Casagrande on bass, and Marvin Tabosa on drums. In case you haven’t noticed, the band doesn’t have any vocalists as they are an instrumental metal band.

The band currently has 2 EPs that you can find on streaming services. One of them is also available on CD Baby, but I couldn’t see the other one there. Back to my review… 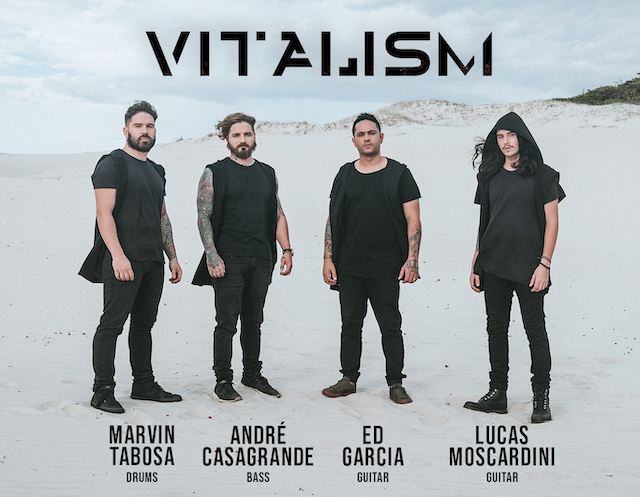 For this article, I will strictly focus on the 2nd EP, SY. I only talk about albums that I’ve gotten to know through listening multiple times. To be perfectly honest, I haven’t listened to the 1st EP, Causa, too much. So, let’s stick with SY and see what Vitalism has offered us here.

I wasn’t sure if I was gonna like the EP. Sure, I’d loved the song Favela but it’s another thing to listen to an entire EP. Especially, when you consider the fact that it’s all instrumental. It’s not easy to keep the listener engaged sometimes. I also don’t always listen to what people refer to as djent. I know everyone uses different labels – and I don’t really care for labels – but if you’ve listened to some of the modern metal bands, you’ll know what I’m talking about. I don’t always go for this type of metal because sometimes the riffs turn so complicated that you lose the groove. But founder Ed Garcia already has the ingredient that makes Vitalism’s music different than that of their contemporaries written out; Vitalism wasn’t going to be “just another instrumental band, but an experience of energy and vitality exchange with our fans through the songs.”

That energy comes through. I think the reason why their music sounds good is because they are not afraid to mix things up and infuse different musical elements into their modern metal sounds. They also infuse a lot of Brazilian melodies. The band is from Brazil and the infusion of the sounds of their home makes the music so much more unique. Those melodies were my favorite parts of these tracks.

Note: For the review, I followed the order of songs that I saw on Spotify.

We start the EP with Pagan, Pt.2 (Part 1 is on the 1st EP), and right off the bat, you hear the clear production. Every instrument is well-balanced in the mix. And here’s the thing… Just when you think this is another “djent” track, about a minute into the song, Vitalism completely throws you off by introducing a new melody. I just love the groove in this part of the song. The Brazilian elements come into effect and give us a great groove. From then on, the band doesn’t lose any energy. The lead guitar section is incredible too. I heard a lot of Marty Friedman-esque note selection and phrasing, which I liked a lot. The long guitar solo is like a story of its own and sounds great. This is a great track that illustrates what this band can do.

Ayahuasca, named after an element that is “hallucinogenic tea native to South America”, continues with the blend of modern metal and the unique sounds of Vitalism. My favorite part of the track is right after the 2:30 minute mark, where they slow down a bit to allow some really beautiful melodies come through. The harmonies, the chord choices, the way the bass and drums work to keep the rhythm tight, are all so well executed. And once again, I hear a great guitar solo. I don’t know which guitar player most of the solos on this EP, but they sound great. There’s definitely a Marty Friedman influence on the leads, I heard it on this solo too. That’s certainly not a bad thing – Marty rules!

A quick break from songs to also mention the language some of these song titles refer to. I will be honest and admit I didn’t know much about the Tupi-Guarani language. Tupi and Guarani refer to two groups of indigenous peoples of South America. On a similar note, Tupi-Guarani refers to the “most widely distributed subfamily of the Tupian languages”, according to Wikipedia. It’s relevant to our topic because most of Vitalism’s song titles make references to this particular language.

Yamí Obi, which means “blue night” in Tupi-Guarani, is probably the most unique of them all. It starts with this mellow melody. It’s groovy but not in a heavy kind of way, it’s almost funky at first. Then the band introduces saxophones along with the heavier guitars and drums. The contrast between the saxophone and guitars create this balance in the end that I enjoyed. Later in the song, we get piano and we get this almost jazzy sound in the middle of everything else! I mean, come on, how can you not appreciate this kind of music when the band is literally throwing so many things at you within the span of only a few minutes! It just got better with each listen. You can’t guess where this song is going to go, you just have to listen to figure it out. Really well executed.

Favela is the track that got me into the band so, of course, I have to talk about it. That part that starts around the 0:42 mark, to be precise, is what got me so interested. These guys know how to mix it up. They know how to infuse the music of their country and use it to add more groove to their tracks. I thought Favela was going to be my favorite on the EP, but it’s hard to beat Yamí Obi.

The last track is Ramaten. It kicks us off with a great bass line and some electronic elements in the music. Not for long though, because we soon kick into higher gear and get some more of the modern metal sound and some insane drumming! The lead guitar work around the 2:45 mark sounds just as exotic as the songs themselves. They up the tempo towards the end before concluding this track, as well as the EP itself.

So, there you have it. Like I said at the beginning of the article, I was actually working on something else to publish. But there was no way I wasn’t gonna talk about Vitalism. No matter what your favorite metal or rock genres are, you should give these guys a listen. I notice that they are already quite popular on social media, with some of their YouTube videos showing more than 1 million views, and it’s all well deserved. The music isn’t like any other band, it’s truly their own and it’s so rich in texture. I’m a fan now and I’m going to follow their new music as they release them.